2019
Peacefully at the Queen Elizabeth Hospital, on Wednesday, January 9, 2019, the death occurred of Joseph Gallant, of Stratford, age 97 years. Beloved husband of the late Roberta Gallant (nee Edmonds). Loving father of George (Brenda), David (Joan), Linda Milligan (Dave), Joanne, Lawrence and Rosie Peters (Mike). Joseph will be missed by his brother Clarence (Mary - deceased); 13 Grandchildren and 13 Great-Grandchildren and sister-in-law Auldine Gallant. He was predeceased by son - Elric Gallant; parents - Maglorie and Eugena (nee Haché) Gallant and brothers - Faustin (Theresa), Oscar (Patricia) and Cedric and sister - Eileen Blacquiere (Art). Resting at Hillsboro Funeral Home, 2 Hollis Ave., Stratford for visitation Sunday, January 13, 2019, from 4-8 p.m. The Royal Canadian Legion, Branch # 1 will hold a tribute service prior to visitation at 3:30 p.m. Funeral mass will be celebrated on Monday, January 14, 2019 at Our Lady of the Assumption Church, Stratford, at 10:30 a.m. Interment will be held later at Our Lady of the Assumption Cemetery. As an expression of sympathy, memorial donations to the Canadian Cancer Society or the QEH Foundation would be appreciated. Completion of funeral arrangements have been entrusted to Hillsboro Funeral Home. Online condolences may be sent to hillsborofuneral@eastlink.ca. 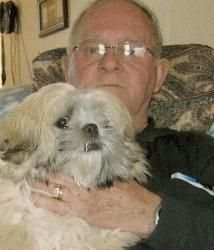 At his home on Saturday, September 4, 2010 of Leroy Raymond Gauthier, Charlottetown, age 69 years. Beloved husband of Marie (nee Perry). Father of Danny (Tracey), Doni (Carm), Jimmy and Matthew. Lovingly remembered by his grandchildren Coady, Kristen, Gillian, Nicholas, Brenna and Hunter. Brother of Louis (Connie), Rendle (Sandra), Rodger (Colleen), Blaine (Lorraine), Carol Gass (Ralph), Rayola Coulson (Robert). Brother-in-law of Darlene Gauthier. Step-father of Randy Malone, Jeff Malone (Peggy) and Alana Vail (Rodney, deceased). Predeceased by his parents Raymond and Olive (McCabe) Gauthier and by his brother Leigh. Resting at Belvedere Funeral Home until Wednesday at 12:45, then to the Church of the Most Holy Redeemer for funeral mass at 1:00 p.m. Interment in the Roman Catholic Cemetery, Charlottetown. Visitation Tuesday 2-4 and 7-9. Memorial donations may be made to the Heart and Stroke Foundation.  Royal Canadian Legion Branch #1 Charlottetown will hold a Tribute Service of Remembrance at the funeral home on Tuesday evening at 6:30 p.m.

Mourners are invited to a reception (approximately 3-5PM) in the Canada Room of the Charlottetown Legion, following mass and interment, on Wednesday 8 September 2010.

1922 - 2012
Peacefully at the Veterans wing of Taigh Na Mara Nursing Home, Glace Bay, Nova Scotia where he was a resident for seven years and formerly of Desable, PEI of Raymond Victor Genge in his 90th year. Born in Port Aux Basques, NFLD, he was the son of the late George Thomas and Annie (Vardy) Genge. He will be lovingly remembered and missed by his children Roy (Veda) Genge of Charlottetown, Shirlee (John) Cruickshank of Point Edward, Cape Breton; his grandchildren Nicole (Shawn) Genge, Kamala (Steve) Brown, Raylee (Chris) Morrissey, Jonathan Cruickshank, Joel-Raun Cruickshank, Chelsea (Eric) Lacasse and seven great-grandchildren. He was pre-deceased by his wife Daisy (Hambly), brothers Morley, George, Roland, Gilbert and sisters Beatrice and Muriel.

Resting at MacLean Funeral Home Swan Chapel from where the service will be held on Saturday at 10 a.m. Interment later in Clifton Cemetery. Family flowers only, however if so desired, memorials to The Alzheimer’s Society or charity of choice would be appreciated. Visiting hours on Friday from 3-6 p.m.

Peacefully, at The Queen Elizabeth Hospital on Thursday, July 26, 2012, of Donald J. Gillman of Stratford, age 86 years. Beloved husband of June. Loving father of Sylvia (Bev) Deveaux, Robbie (Tracy), Roy (Angie), Darlene (Gabe) Denise, Linda (the late Walter) Kalmuk, Julie (Brad) Cannons and Cheryl Gillman (Justin Simmonds). Grandfather of 18 grandchildren and 14 great-grandchildren. Resting at MacLean Funeral Home Swan Chapel from where the funeral will be held on Tuesday at 11 a.m. If so desired memorials to The Canadian Cancer Society or The Canadian Diabetes Association would be appreciated. Visiting hours Monday from 3 to 6 p.m. The Royal Canadian Legion will hold a service of remembrance at the funeral home on Monday at 5:45. Online condolences may be made at www.macleanfh.com

2013
A Veteran of the Second World War
Peacefully, at the Atlantic Baptist Home, on Sunday, April 28, 2013, of Brian James “Jim” Hatcher of Charlottetown, age 87 years. Veteran of the Second World War.
Beloved husband of 60 years of Margaret (nee Poole). Loving father of Brent (Maulyn), and Colleen. Grandfather of Tyler Gallant (Christine Murnaghan). Brother of Marjorie Fear and Sylvia (predeceased) and brother-in-law of Jean Clow and George Poole. Also survived by numerous nieces and nephews.
Resting at MacLean Funeral Home Swan Chapel from where the service will be held on Wednesday at 10 a.m. Interment in Lower Montague Cemetery.
If so desired, memorials to Lower Montague Cemetery would be appreciated.
Visiting hours Tuesday from 4 to 6 p.m.

Courtney Edmund Head, a resident of The Mount Continuing Care Community in Charlottetown, left us peacefully on Friday, December 16, 2016 at the age of 97 years. Courtney was predeceased by his loving wife Evelyn (Dubé) in 2002 after 57 years of marriage. He is survived and will be missed by his family: Melford (Jeannette) of Calgary AB, Anne (Leo) Gillis of Moncton NB, Melvin (Martine) of Ancaster ON, Evelyn (Eric) Weeks of Pleasant Valley, PE and Michael (Sharron) of Brantford ON. His is also survived by ten grand children: Lisa (George), Jennifer (Chad), Kevin (Janelle), Lana (Kevin), Marieke (Anthony), Ryan (Erin), Colin (Carolyn), Pieter (Heather), Erika (Dan) and Lukas (Tong Tong) as well as eight great grand-children: Rylan, Edward, Simon, Sam, Kenley, Martin, Oliver, and Amelia. Also, part of his life since 2005, is his good friend Shirley Horne.

The RCAF Wing Association Charlottetown and the Royal Canadian Legion Branch No. 1 will hold a Veteran’s Tribute Service at The Mount Continuing Care Community (141 Mount Edward Rd in Charlottetown) on Friday, January 20, 2017 at 2:00 pm, to be followed by a Celebration of Life.

In lieu of flowers, donations may be made in Courtney’s name to the Heart & Stroke PEI, the PEI Humane Society or to a charitable organization of choice. Expressions of Condolences may be made at http://www.belvederefh.com

1924 - 2010
Peacefully at the Queen Elizabeth Hospital on Friday, February 12, 2010, of Johnny Hegarty of the Garden Home and formerly of Fort Augustus, age 86 Yrs. Loving brother of Winnie McInnis, Fran Barker, Bernadette Murphy and Tom Hegarty (Betty). He is also survived by many nieces and nephews.

As an expression of sympathy , memorial donations to the Lung Association would be appreciated.

The Royal Canadian Legion Branch #1 Charlottteown will hold a Service of Remembrance at the Hillsboro Funeral Home on Mon 15 Feb 2010 at 7PM.

Completion of funeral arrangements have been entrusted to Hillsboro Funeral Home.

Online condolences may be made to hillsborofuneral@eastlink.ca.

Resting at MacLean Funeral Home Swan Chapel from where the funeral will be held on Monday at 10AM.  Interment later in Tryon Peoples Cemetery.  If so desired, memorials to the Parkinson Society or the Heart and Stroke Foundation would be appreciated.  Visiting hours on Sunday from 2 to 5 PM.  Online condolences may be made at www.MacLeanFH.com.